Here’s the impact of using 5 types of reusable items

ANALYSIS: What policy steps have Nigeria taken since COP26?

Snapchat is the new competitor to Zoom, unveils web and paid versions

Snapchat is the new competitor to Zoom, unveils their web and paid versions according to a report by CNN. Unlike many other social media platforms, Snapchat has been available only on mobile since its launch over a decade ago. But on Monday, the company launched a web-based version of the popular messaging app.

The goal is to give users the freedom to switch between their phones and computers, all while continuing their conversations on the platform. But the new desktop option could also help Snapchat (SNAP) take on a surprising rival: Zoom.
While Snapchat is known for letting users send disappearing chats and photos, called snaps, video calling has become a popular feature of the app, according to the company. Snapchat said its app hosts more than 100 million video calls each month with up to 15 participants each. Now, it hopes that service will become easier and more pleasant to use when people join those calls from a desktop.
The idea is similar to video calling services such as Zoom (ZM), which exploded in popularity during the pandemic, but with some selling points unique to Snapchat. Users will be able to initiate calls more quickly and easily because they’re already connected to friends and can see when others are online, according to the company. Snapchat’s signature photo lenses — the ones that can make users appear to have dog ears, freckles or other features — will also soon be available for video calls on the web version.
Like with the app, the web version of Snapchat opens directly to the camera to encourage users to send photos to friends. In a sidebar, users will see a list of their recent friend conversations, where they can open snaps or start a chat. The web version won’t include all the features of the mobile app, such as the “Snap Map” where users can track their friends or the discover section — at least to start, according to the company. 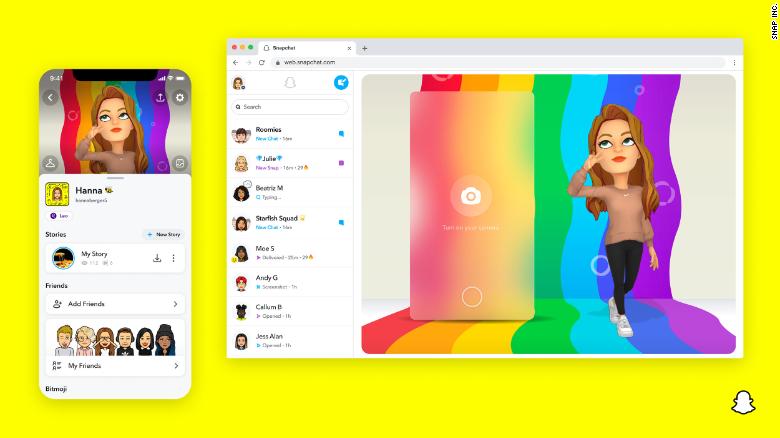 Snapchat is launching a web-based version of the platform that will let users send photos, chat and video call from a computer.
“With so many in our community spending more time online, whether it is for remote learning or working, streaming or just plain browsing — we saw a huge opportunity to make it easier for our community to stay connected throughout their day,” a spokesperson for Snap, the app’s parent company, said in a statement.
To protect users’ safety and privacy, Snapchat for web prohibits users from taking screenshots of chats or snaps (the app alerts users if someone screenshots their chat or photo). The company also created a “privacy screen” to hide the Snapchat window if users click away.
The launch comes as Snap, the parent company of Snapchat, has been pummeled on Wall Street after posting a larger than expected loss in its most recent earnings report and later warning investors that it had slashed its upcoming quarterly forecast due to a worsening economy.Shares of Snap, which is set to report second quarter earnings later this week, have tumbled 70% since the start of this year.
Last month, Snap introduced a new paid subscription service called Snapchat+ with the potential to boost its revenue.The web version may be a draw for the new, $3.99 per month subscription option. At launch, the web-based version of Snapchat will be available to all users in Australia and New Zealand and to Snapchat+ users in the United States, United Kingdom and Canada. The service will soon roll out to Snapchat+ subscribers in France, Germany, Saudi Arabia and the United Arab Emirates.
Naijateck is Nigeria’s information and communication portal for technology news, Modern Research and Vital information

Get Movies and Television Shows

Alcohol is not good for people under age 40, According to a new global study

Google Rolls out Wallet to users, Continues to live alongside Google Pay

Do It yourself (DIY)

Do It yourself (DIY)