RISING DEMAND IN INDUSTRIAL AND DOMESTIC CLEANERS, PAINTS AND COATINGS DRIVING THE GROWTH OF GREEN AND BIO SOLVENTS MARKET IN 2022

Why running can keep women healthy and put men at risk

This is why there So Many Zero-Day Security Holes?

How to switch languages using the Android Gboard keyboard

Our automobile technology team compilation of some of the best concept hybrid of cars and bikes for 2021 will make the reader wonder about these creatives’ giant stride. The product concept proposes that consumers prefer products with better quality, performance, and features than expected. While some of the products are still in the ideation stage, some are funding the production of their design. Let us quickly dive into the best concepts hybrid car-bike cars created in 2021
The RYZR
This concept product is from the London-based creative studio SAIC Design. A cross between a car and a motorcycle. The vehicle is R’s RYZR has a similar thrill of the experience as cycling but with the car-like comfort seating design. The Ryzer sports twin seats separated by a central spine to allow unhindered views of surroundings for both riders. The front wheels stay apart like a regular car, but owners can adjust the rear wheels to remain closer, giving the users more control over the vehicle.
The steering wheel of the RYZR is mounted centrally but can be switched to either side depending upon which rider wants to be the driver. This means a passenger can be the driver while the driver takes some rest or have fun. Let us call this a dual position driving system. Ryzer has done a fantastic job in hiding the engine and other mechanics away from the direct view. It’s hard to tell that vehicle is electrically charged. This futuristic-looking EV also comes with a futuristic starting system
Just like science fiction movies, the Ryzr comes with a specially designed jacket. The rider needs to sit in the vehicle wearing this jacket, and the rider will get access to the controls. 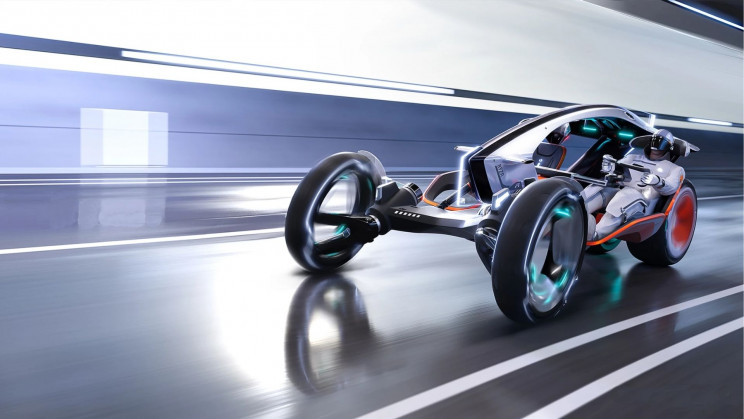 The Canyon car driver has to pedal, and because spinning legs are where the steering wheel would normally be, the vehicle is maneuvered with tank-steering levers to the side. The motor-switching car has been designed to sit in two EU classes: the e-bike class, with a maximum speed limit of 15mph, and the 50mph L7E scooter class. The Canyon quadricycle car is smaller than a Renault Twizzy, a Carver tricycle car, or a Canta microcar, the type of two-seater car often seen on Dutch cycleways. The Canyon is a four-wheel car and is 83 centimeters wide, one meter high, and 2.5 meters long. It weighs  95 kilos and has an expected range of 95 miles

Critically, it has a roof and is designed for full-weather protection. Whenever it is raining you are fully protected, safe, and dry  inside the capsule, when the sun is shining, riders will have a full bicycle-riding feeling with wind flowing around and aroma of the outside, 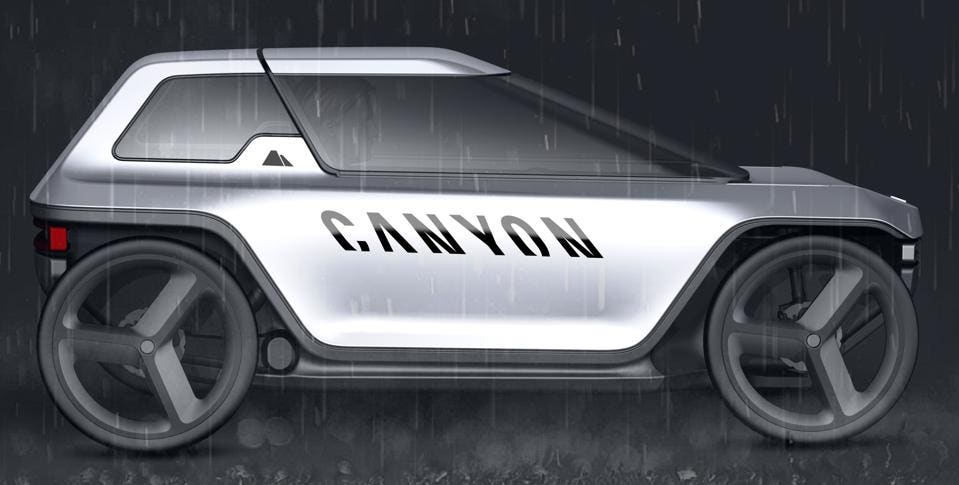 Canyon’s concept car was launched in London alongside a new electric bike platform, the Precede: ON, a carbon-framed urban utility e-bike with integrated lights, fenders, a kickstand, and rear rack.

Canyon Bicycles GmbH was formed in 2001 by the current CEO, 58-year-old Roman Arnold, and was the new company name for Rad-Sport Arnold, a large bike shop in Koblenz founded in 1985 as RTI Sports, a distributor of Italian road-bike parts. (RTI Sports was co-founded by Roman’s brother Franc, who later founded Ergon, the grips-to-saddles brand, also based out of Koblenz.)

Rad-Sport Arnold sold an own-label bike line called Radical, the name of which was changed to Canyon in 1996. The consumer-direct company started designing its own Asia-made bikes in 1998.

The brand has a clinically clean, high-tech, new-build factory outside the city limits of Koblenz.

Polestar showed a working prototype of the Re: Move concept, developed out of our very own Re-Made series in collaboration with Konstantin Grcic and Hydro. The slim, 750mm electric transporter is designed for urban centers, capable of taking up to 180kg of cargo through bike lanes. Polestar describes it as a ‘new vehicle category’, and it typifies the continuous stream of smart thinking coming out of the brand. Another collaboration on display was a new version of CAKE’s Makka bike. The Makka – Polestar edition by CAKE is designed to be mounted on a Polestar 2 car, with an integrated charger that tops up the bike battery as you travel to your destination before it becomes the ultimate last-mile commuter or adventure bike.

BMW’s two AMBY concepts encapsulate the company’s future intentions. AMBY – ‘adaptive mobility’ – takes the form of two different types of two-wheelers. The first, the i Vision AMBy, is an electrified bicycle, or ‘high-speed pedelec for urbanists’, as the Bavarian company puts it. The second, the Motorrad Vision AMBY, is a more robust, motorbike-like machine that does away with pedals altogether. Both serve to blur the lines between bike, e-bike, and scooter, although the company notes that taking either on the main road at up 60km/h will require insurance and a license.

The final two-wheeler from BMW was the Motorrad Concept CE 02, the latest in a series of increasingly radical concepts from the car maker’s motorbike division. The CE 02 is a vision of a future electric scooter, boasting an integrated skateboard that doubles up as footrests, along with zippy acceleration and a geometrically pure and uncomplicated design.

The IAA Mobility buzzword was ‘circularity’. With electrification essentially established as the powerplant of the now and immediate future, the next challenge is to reduce the massive carbon footprint involved in building a car – up to a quarter of a conventional car’s lifetime emissions are generated in the factory, a figure that rises for electric vehicles. BMW’s answer is the i Vision Circular, a look forward to the status of four-wheeled luxury in 2040. The answer is a rather more modest exterior approach than at present, with the passenger compartment morphing into the entire superstructure of the car, adorned with subtle geometric forms and lighting.

At just 4m long, the form has been shaped to maximize interior space. A ‘phygital’ user interface occupies the dashboard, part artwork, part command center, with driver information projected onto the windscreen. The concept even has sound design by Hans Zimmer. Although the shapes and design ethos is new, the main story behind the i Vision Circular is its use of materials. As the name suggests, this is a car created for a closed materials cycle, with every single element designed to be reused or recycled, from the bodywork to the battery. The company currently achieves a proportion of 30 percent recycled and reused material in its new cars and hopes to push that to 50 percent in the next few years. The trend towards fewer materials is something the company’s designers explored with the current BMW iX and the Circular goes further, with quick-release fasteners used to help ease the car’s eventual dismantling.

The second of Audi’s three ‘Sphere’ concepts, the grand sphere is a super GT that eschews the values of speed and dynamics in favor of comfort and experience. Like the earlier Audi skysphere Concept, this transformation includes a steering wheel that disappears out of sight. The interior is spacious, reminiscent of the saloon on a yacht or the cabin of a private jet. The concept’s vast length and width allow for plenty of room, including space for a potted plant, and quiet contemporary luxury, with lots of curved, unvarnished wood and no leather to be seen. The big bodywork is undoubtedly elegant and hints strongly at the company’s upcoming electrified flagships.

Know the 8 advantages of a bald head

State of the Nation: Resign if you can’t secure Nigerians – Kachikwu tells Buhari

State of the Nation: Resign if you can’t secure Nigerians – Kachikwu tells Buhari